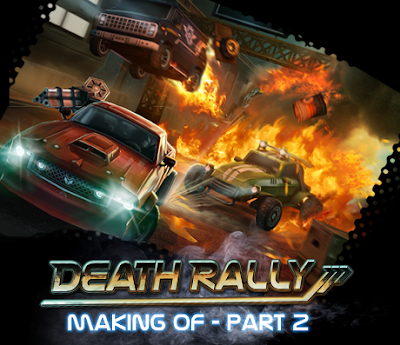 {Click on the images for larger versions)
Race Select Screen, Garage Screen and Resources Screen make up Death Rally's menu system. They all have the car as a centerpiece.
Upgrading and getting new cars is a big part of the gameplay experience so we thought it was important to enhance the connection between player and the cars between races.
While you are racing the cars are relatively small. The menu screens let you see them up close and personal. We gave each car it's own distinct personality: Vagabond is the weakest car but has great handling, Dervish is a strong pickup truck that can take a ton of punishment, Shrieker is the fast sports car that will break under heavy punishment etc.
One isn't necessarily better than the other, it depends on the scenario. For example: If you have a race where heavy weaponry is available then Shrieker could be a bad choice and Dervish a good choice.
This is the first concept mock-up of the Resources Screen: 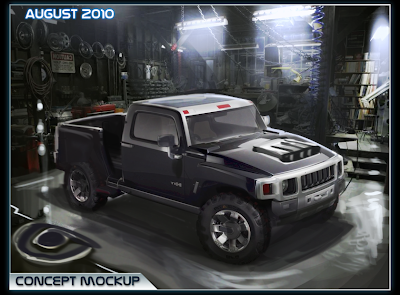 The next picture is the first 3d prototype of the Resources Screen. The screen didn't have much functionality at this stage except for the ability to rotate the view.
If you look closely the terminology is different from the release version:
"Car" became "Health"
"Engine" became "Speed"
"Tires" became "Handling"
"Armor" was added
"Repair" and "Develop" words were removed because they were not needed. Our design philosophy is to keep everything as simple as possible. That includes the speed of navigating the menus, that's why we added the "auto-fill" which lets casual players to skip this screen. 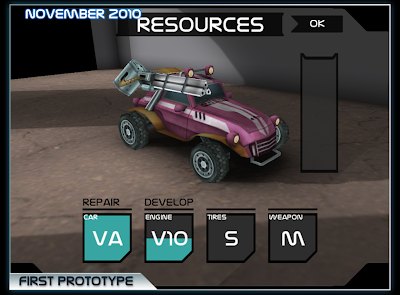 The following image shows the final version of the Resources Screen. After each race you end up here. You can spend the resources on repairing the car, making the car faster, improving the handling, enhancing the armor or upgrading the weapons: 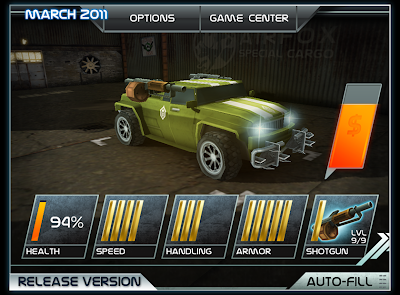 Race Select Screen lets you choose races or challenges. You can also see if there's something new in the garage. (Notice the "New Car", "New Weapon" tags on the Garage button): 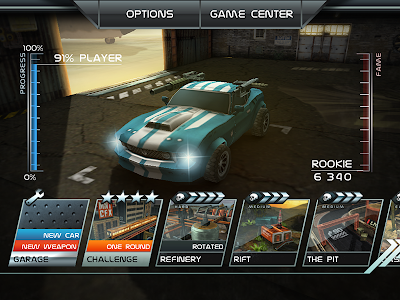 Next up is the Garage Screen. Here you can choose weaponry, change cars and customize car color.
Two months ago Antti Viljamaa amazed everyone at the office, he had used his programming magic to make a procedural damage system for the cars! It helps a great deal in seeing the car's condition: 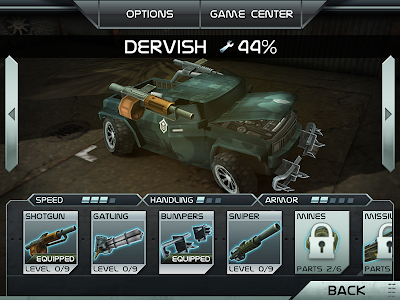